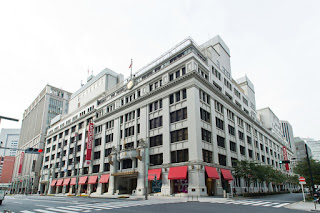 Have a Yen for Great Gifts?

Japan’s premier department store has a spin on the classic “One Day Sale.”
Mitsukoshi was founded in 1673 to sell artisanal Kimono. Rather than the traditional door-to-door selling of the time, Mitsukoshi opened a small storefront in Echigo Province.

Had you visited Nihonbashi, Isetan’s Mitsukoshi's  flagship department store, in downtown Tokyo on March 1st, 2016, you would have found everything offered at a single, and singular, price.
Similar to a “99 cent store” concept, however all 125 items in the event were offered, "on sale" at 1 million Yen, or roughly $9,000, at current exchange rates.

You may purchase items including: his & hers silk Kimono, a crystal ball (I can already predict your future…), a century-old bonsai plant, a unique “Teddy Bear” by artist Karin De Lorenzo, a solid-gold lion, emeralds, rare coral, and more - they’re all $9,000, today only.

Door busters? Perhaps not. However, the products are regularly $15,000 each. Mitsukoshi expects a total sell-out. They are offering consumers an option to "draw lots" for the gifts of their choice.
Retailers, worldwide, strive to provide discerning consumers with unique in-store experiences.  Get in line.
(c) David J. Katz, 2016, New York City

Popular posts from this blog

Tent of the Future

By Unknown July 30, 2012
Sierra Designs has a tent from the future
by Edwin - on July 29th, 2012
Do you love camping? Well, if you have not given camping a go before in the past, you might want to consider taking your family out for a camping trip to the great outdoors while the summer season is still in vogue. Now, there are plenty of companies out there making tents, but here we are with Sierra Designs – a company that has just announced that they have released a spanking new tent for you and the rest of your pack to seek shelter from the elements while you enjoy nature’s bounty.

Sierra Designs’ latest addition will be part of the new line of ExoFusion fast-and-light tents, where it is called the new Mojo UFO. The name itself suggests that it is out of this world, and if you were to read on, I guess you can also come to the same epic conclusion that this tent is truly heads and shoulders above the rest. It is capable of housing two people for a good night’s rest inside, and even more amazingly, the entire sh…
2 comments
Read more

By Unknown August 28, 2014
Nine years and 19 million YouTube views later, Steve Jobs's commencement address to Stanford University's graduating class of 2005 has achieved iconic status. Jobs, the Apple visionary who died in 2011 at age 56, delivered a speech that resonated far beyond the Stanford audience, with a masterful mix of personal anecdotes, sparks of insight and universally applicable pieces of wisdom. Each year, especially around graduation season, people discover and rediscover Jobs's speech and its messages for those who seek meaning and purpose in life and at work. - Carolyn Gregoire Note that Steve Jobs originally asked Screenwriter Aaron Sorkin to write this speech: Sorkin was not available.  - DJK Full text of Steve Jobs' commencement address to Stanford University 2005
"I am honored to be with you today at your commencement from one of the finest universities in the world. I never graduated from college. Truth be told, this is the closest I've ever gotten to a college gradu…
3 comments
Read more