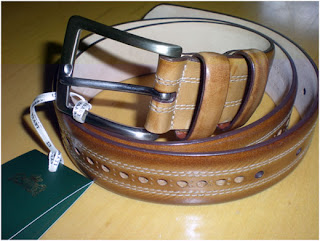 Founded in June 2011, by Kelvin Cheong, Only Brown is an online purveyor of men’s fine leather accessories.  Mr. Cheong distaste for the praise of black accessories led him to compile a collection of quality items from around the world in a myriad of shades of brown from dark to light and in between, and distribute them from his Singaporean headquarters.

I am proponent of brown, yes, even in town.

The number of brown shoes, belts, trousers and pretty much anything else you could think of outnumbers that of anything black in my collection.  Black is great for evening affairs of grandeur and gravitas, but it can be harsh and uninviting in most cases and has no life of its own.  Brown is the antithesis of black.  Brown comes in many hues and shades and carries a life of its own exclusive to the owner.  This is the only purveyor of fine leather accessories I’m aware of that is built solely on offering products in a certain color.

Recently I’ve had the fortunate of conversing with Kelvin about his offerings and philosophy on style and he very graciously offered to have me try one of his products.  Kelvin offers products small and large from travel accessories to lifestyle accoutrements.  At the time of our meeting I was fixated on acquiring another belt.  At the time I had just finished creating my first bespoke belt and was in the mood for another.  While I chose something subtle and somber in my last belt, this time I was in the mood for something more playful.  I decided on the brogue leather belt by Leyva.

Leyva is a Spanish owned and operated company founded 1960 by Antonio Leyva.  Leyva creates some of the most beautiful belts in the world and was recognized with the Alas award in 2008 for its track record of success.

Just coming off a bespoke purchase I was able to specify my own size belt.  This time I had to go back to standard sizing and was a bit hesitant about the fit.  However, the 32 turned out to be a bit snugger than my Hickey Freeman chocolate brown suede belt in the same size.  I can only imagine that the difference exists because of the epidemic of obesity in this country compared to our European counterparts.

The belt itself is fashioned in 100% cow hide with a matte polished brass buckle and the signature brogueing around the whole of the belt.  It also features a slight contrast stitch running lengthwise along the brogueing detail.  The leather is soft and supple and is elegantly stamped with the Leyva crest.

Upon receiving it the belt is beautifully packaged and presented with care and holds its true color compared to what is shown online.  My biggest concern other than the fit was if I had shoes to properly compliment the belt or vice versa.  The color is listed as ‘whiskey’ by but I would’ve called it butterscotch.  At least those are the color cap toe oxfords I wear with it.  It is most certainly a summer/warm weather belt choice.

I’d be hard pressed to reach for this in the winter when my suede or hard wearing bridle belt in burgundy would be better suited for flannels, tweeds, and Shetlands.  However, I did get a few good wears out of it with my linen trousers, pop over shirt and Italian driving loafers.  I’m sure this will be my belt of choice for many sunny days to come whether they are right here in DC or in some foreign playground of which the layman would not be able to pronounce the name.

Grant Harris is a Washington, DC based menswear specialist. He is owner & Chief Style Consultant at Image Granted, LLC. He owns many more pairs of socks than he should.

Popular posts from this blog

Tent of the Future

By Unknown July 30, 2012
Sierra Designs has a tent from the future
by Edwin - on July 29th, 2012
Do you love camping? Well, if you have not given camping a go before in the past, you might want to consider taking your family out for a camping trip to the great outdoors while the summer season is still in vogue. Now, there are plenty of companies out there making tents, but here we are with Sierra Designs – a company that has just announced that they have released a spanking new tent for you and the rest of your pack to seek shelter from the elements while you enjoy nature’s bounty.

Sierra Designs’ latest addition will be part of the new line of ExoFusion fast-and-light tents, where it is called the new Mojo UFO. The name itself suggests that it is out of this world, and if you were to read on, I guess you can also come to the same epic conclusion that this tent is truly heads and shoulders above the rest. It is capable of housing two people for a good night’s rest inside, and even more amazingly, the entire sh…
2 comments
Read more

By Unknown August 28, 2014
Nine years and 19 million YouTube views later, Steve Jobs's commencement address to Stanford University's graduating class of 2005 has achieved iconic status. Jobs, the Apple visionary who died in 2011 at age 56, delivered a speech that resonated far beyond the Stanford audience, with a masterful mix of personal anecdotes, sparks of insight and universally applicable pieces of wisdom. Each year, especially around graduation season, people discover and rediscover Jobs's speech and its messages for those who seek meaning and purpose in life and at work. - Carolyn Gregoire Note that Steve Jobs originally asked Screenwriter Aaron Sorkin to write this speech: Sorkin was not available.  - DJK Full text of Steve Jobs' commencement address to Stanford University 2005
"I am honored to be with you today at your commencement from one of the finest universities in the world. I never graduated from college. Truth be told, this is the closest I've ever gotten to a college gradu…
3 comments
Read more